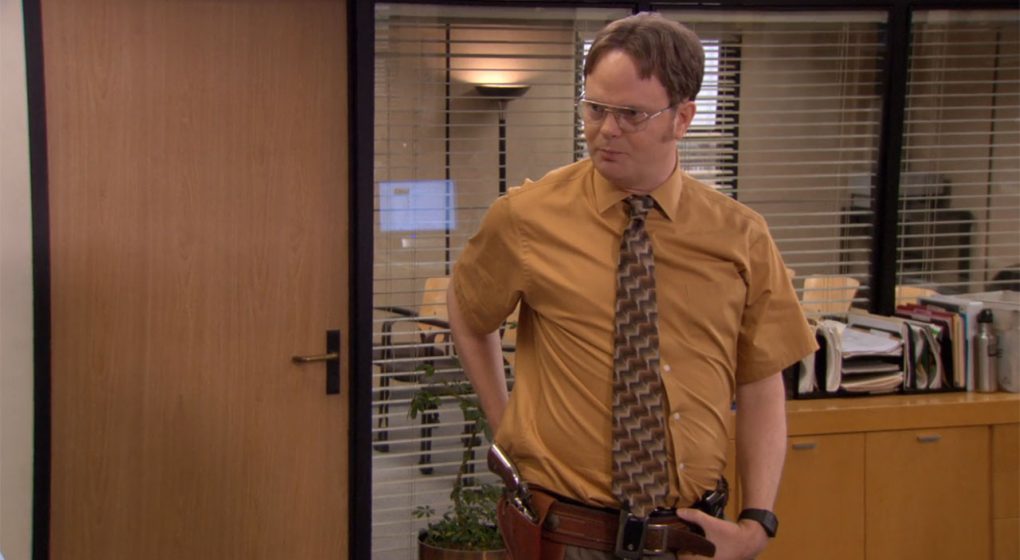 Dwight is a salesman at Dunder Mifflin Scranton, and even interim manager for a time (until he discharges a firearm in the office). Despite Dwight’s great leadership capabilities, he is often times inhibited by his personal feuds and general horseplay with fellow salesmen Jim Halpert and Andy Bernard.

Dwight has been known to utilize a whole host of different accessories and weapons in order to carry out his hare-brained schemes.

Should you wish to learn to arm yourself and accessorize like Mr. Schrute, then please continue ahead for our guide on Dwight’s accessories.​ 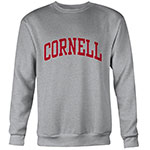 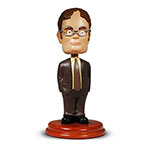 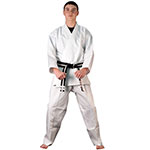 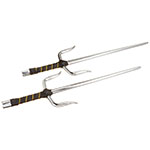 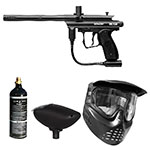 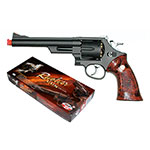 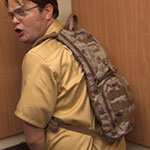 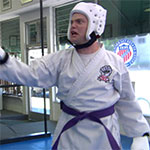 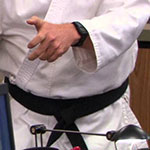 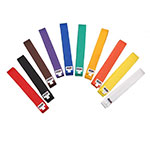 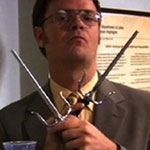 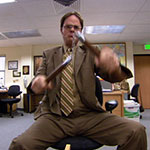 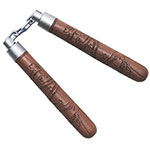 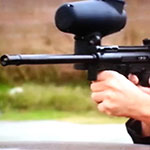 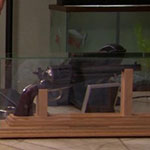 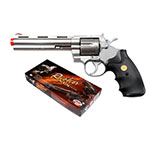 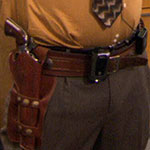 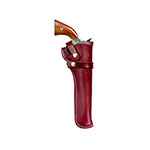 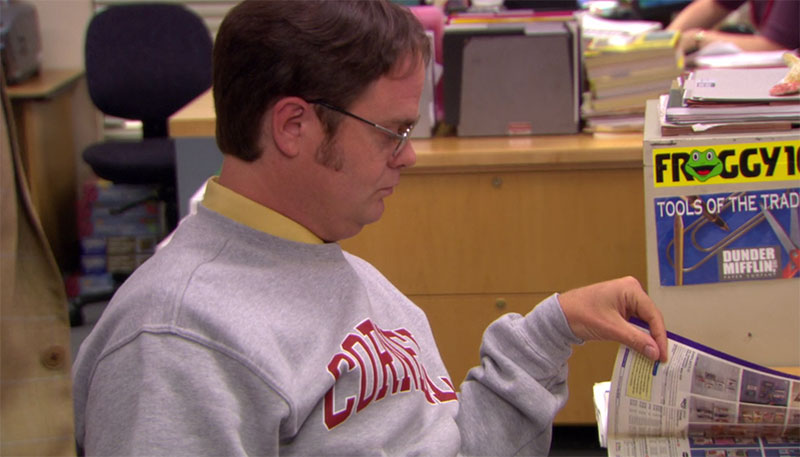 Fact: Dwight’s feelings regenerate at twice the speed of a normal man.

​Other than his everyday work wear and a few other articles, Dwight doesn’t stray too far from his usual style routine. Unless of course he has some sort of alliance or conspiracy plot in the works.

That is the case when it comes to Dwight’s Cornell sweater. As you may know, Andy Bernard (The Nard Dog) is a proud alumni of the ivy league school affectionately referred to as “Big Red.”​

Dwight - being arch-rivals with Andy - decides to irritate him by suddenly, overnight, becoming interested in attending Cornell University, causing Andy an unusual amount of grief.​

This classic Big Red Cornell sweatshirt is an officially licensed product, and it’s also an exact match to the sweater worn by Dwight Schrute.​

​Another one of Dwight’s alternative apparel items is his white karate gi. He is first seen wearing it in the episode “The Fight,” when he and Michael square off to see which of the two man-boys can physically dominate the other.

​Ultimately Michael somehow emerges victorious, but this puts a strain on his and Dwight’s working relationship and friendship. To remedy the situation, Michael promotes Dwight from Assistant to the Regional Manager to Assistant Regional Manager.

T﻿﻿hi﻿﻿s white karate ﻿﻿gi is an excellent match to the one worn by Dwight during the second season of The Office.​

​Dwight is highly skilled in the art of karate and has trained under multiple different sensei, including sensei Ira and sensei Billy. During the time The Office takes place, Dwight progresses from purple belt to brown belt. His training reached it’s pinnacle in season nine when he is awarded his black belt by Sensei Billy.

Here is a selection of differently colored karate belts that are a great match to the ones Dwight has been noted to wear.​ 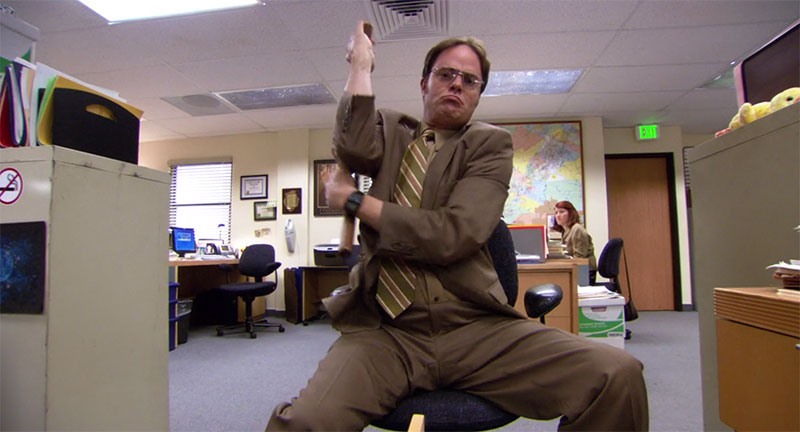 ​Dwight is skilled in many forms of combat and self-defense, so it should come as no surprise that he has been noted to use and/or carry several different melee weapons in and around Scranton, PA.

Including but not limited to swords, knives nunchucks, sais and an assortment of medieval weapons he is seen tossing from his vehicle before being pulled over.

Here is a set of wooden nunchucks that are incredibly similar to the ones Dwight has been noted to carry.​

This set of sais by Blades USA is a great match to the pair Dwight keeps in the office for added security.​

Fact: Through concentration, Dwight can raise and lower his cholesterol at will.

​Dwight has been quoted as saying: “People say, 'oh it’s dangerous to keep weapons in the home, or the workplace.' Well I say, it’s better to be hurt by someone you know accidentally, than by a stranger, on purpose.”

​With Dwight’s wisdom in mind, let's take a look at a few of the different ranged weapons that he has used throughout the series.

​Dwight has been noted to fire a Colt Anaconda revolver to mark the beginning of a race. He was removed from his position as interim manager for firing his Remington 1875 in the office, endangering all employees present and nearly deafening Andrew Bernard. Also of course, Mr. Schrute is an avid paintball enthusiast.

This spring powered airsoft revolver by TSD is modeled after the Colt Anaconda, so it’s an excellent match to the one used by Dwight.​

This non-blowback airsoft revolver, also by TSD, is very similar to the Remington 1875. It’s a great match to the weapon Dwight keeps holstered at his side as acting manager of Dunder Mifflin Scranton.

​Here is a paintball package by Spyder that includes a black paintball gun that is quite similar to the one Dwight has been seen firing on The Office.

The Miscellaneous Accessories of Dwight Schrute 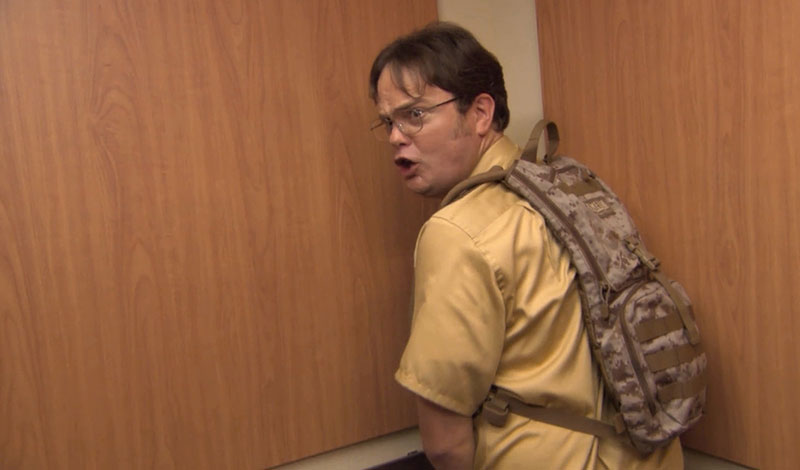 Fact: Dwight has trained his major blood vessels to retract into his body on command.

​Dwight Schrute has been known to employ several strange gadgets and gizmos ranging from hydration backpacks to “gaydar.” Let’s take a look at a few of our favorite items just ahead.

This hydration backpack in multicam pattern is not quite an exact match to the one used by Dwight, but it is surprisingly homogeneous to the one he uses to hydrate himself at his desk and in a malfunctioning elevator.​

​Here is an authentic adjustable leath﻿er Remington holster that is very much like the one used to carry Dwight’s sidearm.

Finally we have thi﻿﻿﻿s Dwight Schrute bobblehead that is an officially licensed product and therefore obviously an exact match to the lookalike desk toy given to Dwight anonymously by Angela Martin.

​That’s just about everything that we could find regarding Dwight. Hopefully you’ve found something of interest to you here. It was astonishing to find just how many relevant items are available relating to him, but that could just be because he has such interesting hobbies.