How to Dress Like Negan (The Walking Dead) | TV Style Guide

Negan is the charismatic, homicidal and quick-witted leader of the ruthless gang of survivors known as The Saviors.

Rick and the group first learn of Negan and the Saviors from Jesus and The Hilltop Community. (Also Daryl blasts away a Savior scouting crew with a missile launcher.)

As part of a negotiation for half of the Hilltop’s food and supplies, Rick’s group agrees to eliminate the threat of Negan and the Saviors.

While they do succeed in slaying numerous members of the Saviors, Negan is not among them, which becomes obvious to the group when he makes a frightening introduction in the season six finale.

Should you wish to recreate the style of Negan from AMC’s The Walking Dead, please continue reading ahead. 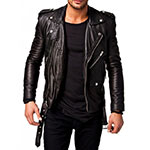 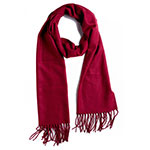 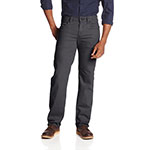 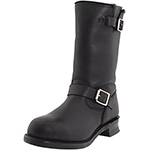 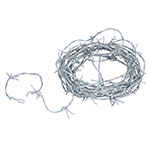 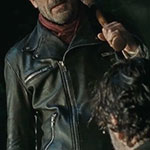 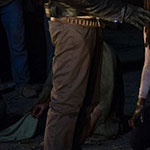 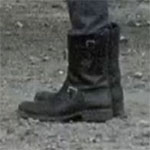 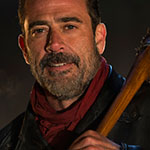 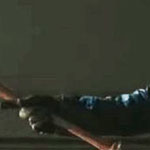 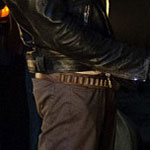 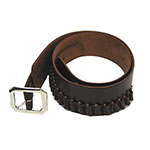 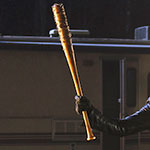 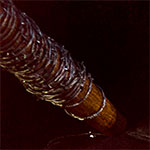 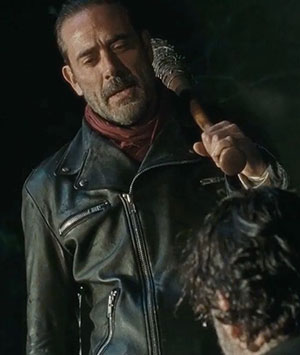 While we didn’t get much of an in-depth look at Negan during the season six finale of TWD, we did get a feel for Jeffrey Dean Morgan's interpretation of the character, (which I am personally thrilled with).

Who knew you could laugh with and kind of like someone who you know is about to bash in the brains of one or more of your favorite characters?

We also see that AMC isn’t straying from the source material when it comes to Negan’s wardrobe and appearance.  That of course means a fancy scarf to keep his neck warm during those savage beatings inflicted by Lucille - on behalf of Negan.

This burgundy scarf is an excellent match to the neckwarmer worn by Negan during the season six finale.

Negan’s signature look from the Image comics series is beautifully translated for television. The most important piece, of course, being his leather jacket.

He is seen wearing it during his only appearance of the sixth season of The Walking Dead.

His jacket is a classic style “biker” jacket. It comes in black leather with silver colored zipper closures on the pockets.

Here is a black leather biker jacket that isn’t quite an exact match to the one worn by Negan, but it is very similar!

The Legwear of Negan 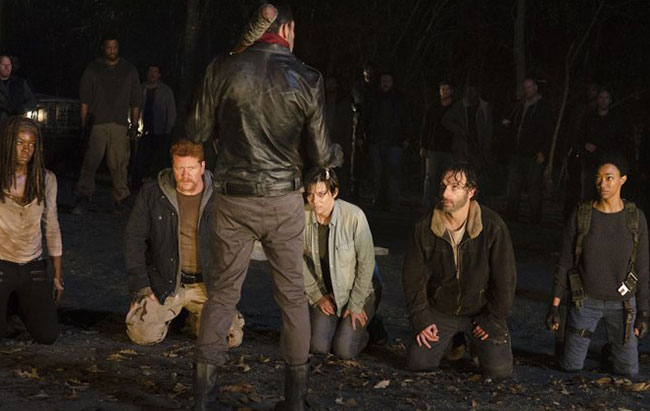 Negan’s legwear is somewhat plain and generally pretty straightforward. He has been noted to wear simple gray-tone casual pants.

The light coloring of Negan’s pants does seem like an odd choice to me, if you consider the sheer amount of blood and brain matter that he is known to spill regularly. Then again, it’s possible that I’m overthinking it.

These Lee's straight leg jeans in stone cold gray are quite similar to the pants worn by Negan on AMC’s The Walking Dead.

Whether you want to create an accurate Negan costume, or you’d just like to pick up a specific item of his wardrobe - like his jacket or boots for example - you’ve come to the right place.

Negan has been noted to wear black leather boots, they appear to be ankle boots with harness ankle straps, dual pool handles and rubber soles.

Here is a pair of Durango harness boots in oiled black color that are nearly identical to the boots worn by him. 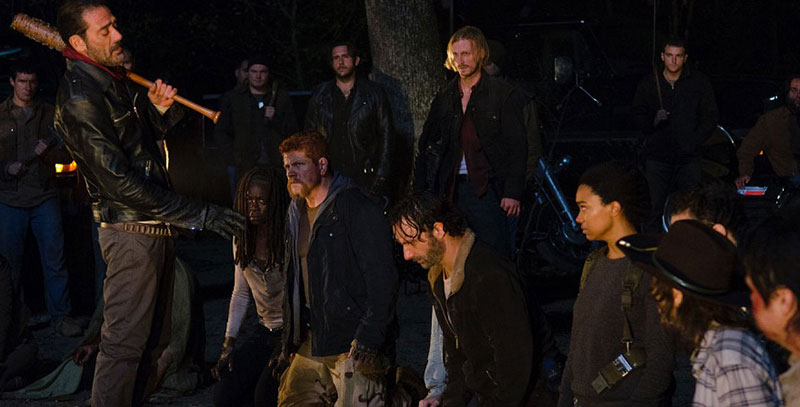 While he isn’t known to carry much around, he has been noted to use or wear at least a few little extra accessories, including but not limited to: a black leather glove and a brown cartridge loop belt.

Negan has been noted to use only one weapon during the sixth season finale. His trusty baseball bat wrapped in barbed wire, affectionately nicknamed: Lucille.

These black leather gloves are a great match to the single glove Negan wears on his right hand.

Here is a cartridge loop belt in brown leather that is a near match to the one he wears.

According to Jesus, Negan has been quoted as saying that they need to understand things “right off the bat.” I’m certain the pun was intended, knowing that Negan’s weapon of choice is his brutal baseball swatter Lucille.

This Louisville Slugger baseball bat would make an excellent custom “Lucille”, should you be so inclined.

Arguably the most important ingredient for a custom “Lucille” bat, this faux barbed wire is a safer, less costly alternative to the real thing.

In conclusion, we found that Negan’s simple design translates to live-action easily and naturally. The simplistic nature of his style also makes many articles of his wardrobe easily accessible.

Whether you loved or hated the handling of the season six finale and Negan’s introduction, one thing is for certain. We’ll be watching to see what happens next.

Nice one!!! Are you guys going to make some for Fear The Walking Dead too? would be awsome 😀

Yeah, we were thinking about it, especially since they’re doing a second season now 🙂

I should then add that the jacket that Nick uses is a G9 Original Shell Jacket ( here is a link to one from ebay http://www.ebay.com/itm/Baracuta-G9-Original-Harrington-Jacket-/222104415737?hash=item33b6746df9:g:EzkAAOSwE6VXJlnv ) and that travis’s black shirt is the Manawa wearing Woolrich Expedition Chamois Shirt ( here i a link http://www.woolrich.com/woolrich/details/men-s-expedition-chamois-shirt/_/R-6110 ) and last, the watch that travis has seems to be a Casio Men’s AW590-1AVCF ( here is a link http://www.amazon.com/Casio-AW590-1AVCF-G-Shock-Silver-Tone-Digital/dp/B0099L3NVE ) You could just remove my comment when/if you make the characters 🙂
-Love from steffen <3

I believe you linked to the wrong Dingo boot. Here is the one you want: https://www.amazon.com/dp/B005I4DAYQ/

Nice James, thanks for that 🙂

I stumbled upon a pair of boots that look to be even a closer match than the durango pair. Check out Frye John Addison engineer boot.