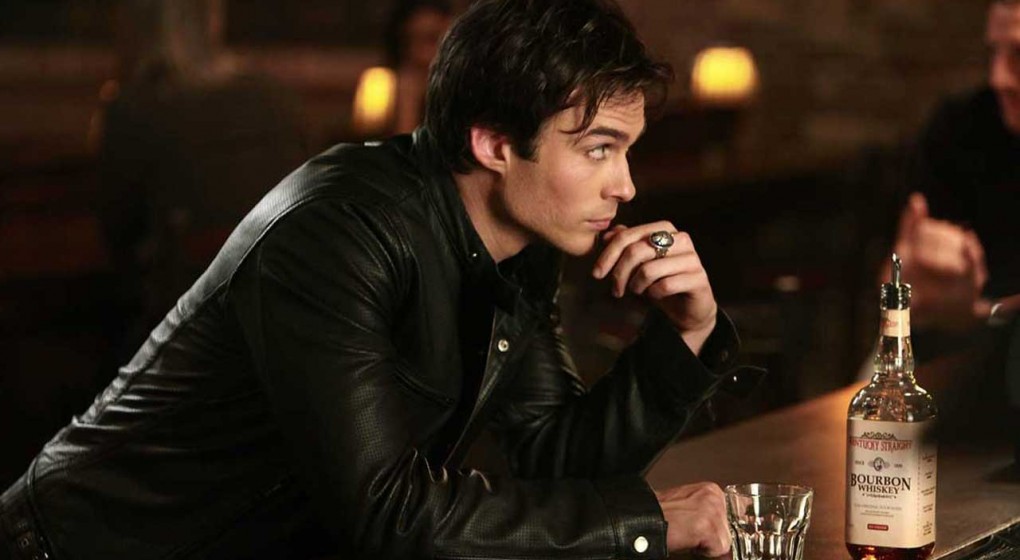 Damon Salvatore, the older, more badass brother of Stefan Salvatore.  How can you instantly tell that you wouldn't want to mess with Damon?  His clothes, of course!

Damon's style definitely goes right along with his character, black and leather, leather and black.  He does have a soft side, but unlike Stefan who you'll often see wearing a hoodie, Damon never let's his soft side show (well, almost never). 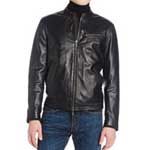 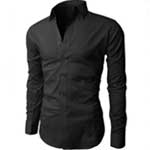 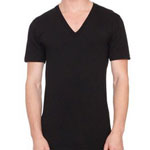 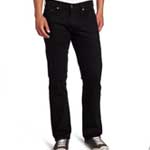 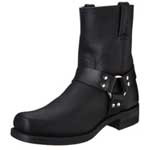 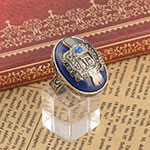 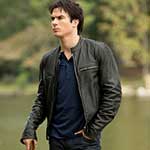 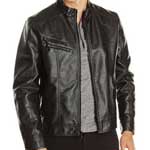 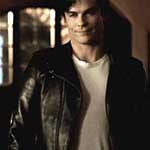 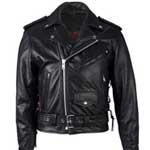 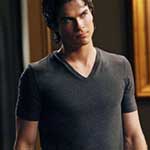 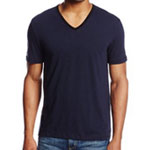 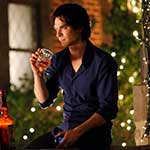 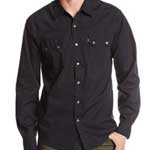 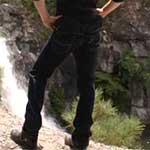 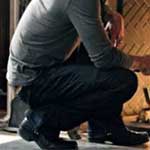 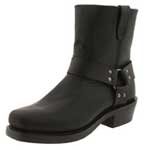 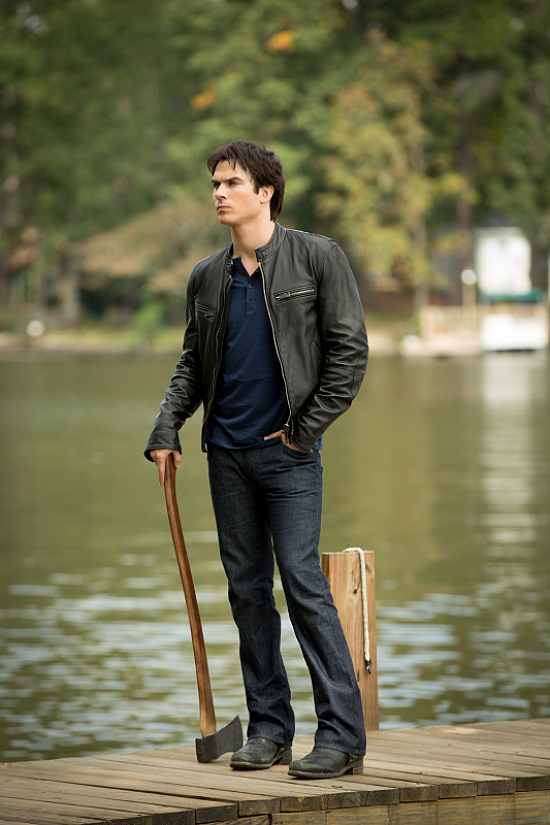 Unlike Stefan, who doesn't really have any one jacket that sticks out to me, when I think of Damon, I think "black leather jacket".

What brand is Damon Salvatore's leather jacket?  In an interview with Entertainment Weekly, costume designer Jennifer Bryan reveals that, “That leather jacket that Ian wears as Damon, that is a John Varvatos jacket.” She doesn’t say the exact style that it is, but just from watching the show and looking at screen captures, I’ve found a few that look very similar.

“That leather jacket that Ian wears as Damon, that is a John Varvatos jacket.”

The solution? Well, if you have the money, then I’d definitely suggest grabbing the real deal (the John Varvatos above), if not, there are plenty of reputable leather companies that make nice jackets for a lot less. Like this Kenneth Cole Moto leather jacket, it’s about one-fifth the price of the John Varvatos, and still looks about the same.

I’m pretty sure when anyone thinks of the “classic” bad-boy look, a leather (preferably black) jacket comes to mind. The costume designers for Vampire Diaries seem to think that too, but they definitely do vary the specific style of leather jacket he’s wearing.

Depending on the other clothes he’s got on, Damon’s leather jacket style changes. For example, when he’s wearing nicer clothes (like dress pants and/or a button-up shirt) he usually wears a simpler, “flatter” jacket with a collar that lies down. I believe this style is referred to as a “bomber jacket”, and if you Google it, you’ll find a ton of variations on the same basic style.

Biker style jackets tend to have two major variations, and Damon wears both. First, there’s the more classic biker jacket with the big collar, and of course a lot of zippers, and perhaps a belt and buckle around the waste. Everyone knows these jackets, and it’s hard to find a leather jacket company thatdoesn’t have their own version.

This biker style leather jacket is a perfect example of the style, but for a lot of people it’s a little flashier than what they’re used to. 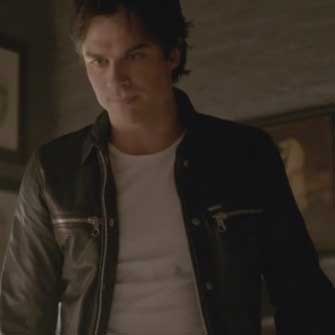 The other main biker style leather jacket is called “moto”, and it doesn’t stand out quite as much as the classic biker version. The moto’s collar is much smaller, and is usually worn straight up. It usually has more zippers than a traditional bomber style, but not nearly as many as the classic biker jacket.

The Kenneth Cole moto mentioned above is another good example, and both of these styles are worn by Damon throughout the Vampire Diaries seasons (though he tends to prefer the “moto” and “bomber” styles the most).

What shirts does Damon Salvatore wear? As far as brands go, they tend to be things like Levi’s, Express, Guess, etc. He wears all of the different styles too, fitted crew and v-neck undershirts, henleys, long sleeve crew and v-necks, and of course button-up dress shirts.

Like his leather jackets, the style of shirt Damon’s wearing all depends on how dressy and/or badassy he wants to look.

With undershirts/t-shirts, the most important thing is how well they fit. I’m sure everyone’s had trouble finding an undershirt that fits well, it took me forever to find a brand I liked.

My own favorite brand of undershirts are the Target brand, Mossimo. If you don’t have a Target near you, or just want other options, I also really like American Apparel, which Amazon carries. T-shirts like this American Apparel short sleeve fit really well, and also don’t shrink in that annoying way (the t-shirt gets so short it’s like a belly shirt or something).

Again, you can always go with the same brands that the characters wear on Vampire Diaries, but if you already have a brand you like, stick with it.

That being said, the brands they wear on the show, like Express and Levi’s, do fit really well. So if you don’t know of henleys and button/snap-up shirts that fit well, check out this Levi’s snap front shirt. Now I don’t own this exact shirt, but I do have a couple Levi’s jackets and other shirts, and they all fit very well.

If you’re looking for more of the dressier Damon look, then I’d highly recommend you check out the H2H slim fit dress shirt on Amazon. They definitely look like shirts Damon would wear, and the price is a lot less than most dress shirts. 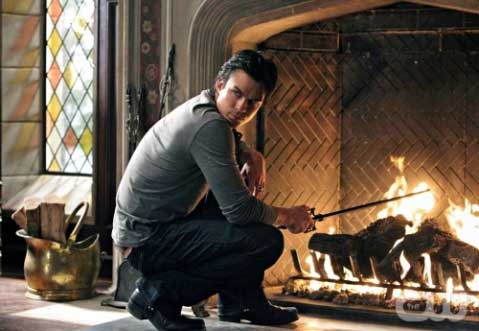 The brand of pants that Damon wears are more or less the same as his shirts: Guess, Levi’s, Express. The general style here is going to be straight leg/slim fit. Damon doesn’t wear his pants tight, but they aren’t baggy either.

For the more casual style, you’ll want to go with jeans, and personally I’d go with these Levi’s 513s in a dark color, either dark blue or black.

When Damon fancies looking fancy, he’ll put on a nice pair of dress pants. The thing is, the fit of most dress pants is too baggy for Damon’s clothing style, so make sure you look for a “slim fit” version. These Kenneth Cole Reaction slim fit dress pants would do nicely.

What shoes does Damon Salvatore wear? These Frye’s Harness 8R boots are the same boots that he wears on Vampire Diaries. Like with the Levi’s shirt I mentioned, I don’t own this exact pair of Frye’s boots, but I do have some of their other boots. I wear them almost every day, they’re pretty comfortable and still look great even though they’re over three years old.

These Frye’s Harness 8R boots are the same boots that he wears on Vampire Diaries.

Frye’s are relatively expensive, so if you don’t want to spend that much, you could always go for something like these Dingo biker boots on Amazon. Their style is the same as the Frye’s, but the Dingos are over 50% cheaper.

I'm sure every fan of Vampire Diaries knows about Damon's daylight ring.  It's identical to Stefan's, only Damon's has a "D" on it, where Stefan's has an "S".  They're quite large, and are made of lapis lazuli.

Like with Stefan's ring, it took me longer than I thought it would to find a good replica.  I ordered this one, and I have to say I'm impressed, especially for under $5 shipped.  Speaking of which, the shipping was my only real complaint, it took almost four weeks for mine to come in.  But the seller does say that shipping times can take a while, so it's something I knew before I made my purchase.

I wasn't able to find the same ring when updating the article, the only one I could find was this one on Amazon, and at the time of this writing it was about $95.

I know there’s still a lot more I can cover and go into detail on when it comes to Damon Salvatore’s style, so be sure to check out my article on Damon's different jackets.

If there’s anything I missed or that you feel I should cover, let me know in the comments down below.